As another physics teacher responded after seeing this pendulum:

Just when I think I have great pendulum set ups in my classroom for either my Physics AP-C or Physics 1 kids and feel good about myself as a Physics teacher, someone “one-ups” me and creates this! 😂 And subtly puts me in my place... 😂😂😂
— Terry Lambert 🇺🇸 (@CoachTLambVB) January 13, 2019

I had retweeted this short video of an epic censer, Botafumeiro, at the Santiago de Compostela:

"O Botafumeiro" is a 120kg censer that reaches speeds of 70km/h at a height of 25m in the transept of the cathedral of Santiago de Compostela. Its motion is due to cyclic pumping by men who pull at the supporting rope. This is the physics behind it https://t.co/xXybkSC2K6 pic.twitter.com/itY4qdfBNN
— Massimo (@Rainmaker1973) January 12, 2019

The video is amazing. There are several on You Tube as well as it is apparently a common stop on religious pilgrimages. The censer, a large metal incense burner, is swung as part of the religious mass. It is over a 1.5 m tall and over 50 kg! The swinging starts off with a push but is increased using a coordinated pumping system by several people holding the other end of the rope. It is similar to pumping your legs while swinging on a swing. Several of the YouTube videos offer glimpses of the people pumping off to the side. Amazingly the censer reaches an angle of 82 degrees with the vertical, almost horizontal and getting close to hitting the ceiling of the cathedral!

The original tweet provided a link to this paper describing the motion of the censer: "O Botafumeiro: Parametric pumping in the Middle Ages." While the math is above even my AP Physics C course there are several recognizable parts. I'm debating showing it to my students just to see if they say, "Oh! I recognize that equation!" I worked out a simple energy practice problem about the censer, making some assumptions for simplifications purposes: 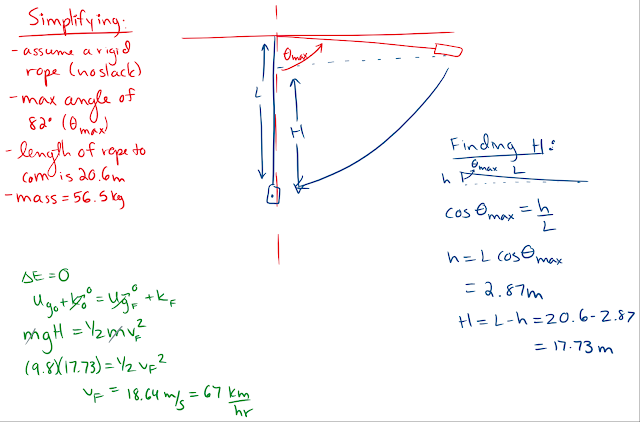 The speed at the bottom of the censer's swing is reported to be 68 km/hr in the paper so that is really close!

I plan on showing the clip to my students in our oscillations unit, although we cannot use it for some sample calculations given it is not a small angle. There were a few suggestions about how to use Pythons and other models but I think I'll have to try that another year.

Posted by Bree Barnett Dreyfuss at 11:22 AM