Gaussian Surfaces for the win

I worked all last weekend learning how to integrate the Electric Field near an infinite line of charge, finite line of charge, charged ring and charged disc. It was brutal. The only thing worse was working my AP Physics C students through it. Students are "supposed" to learn it, it's right there in the College Board Objectives for the course:

Yet the concept is infrequently seen on the AP exam so some teachers hope for the best and don't teach it. I decided I would do a one day lecture along the lines of "Just follow me through the math kids!" I figured it was the best of both worlds, they technically saw it and some might remember it and I wasn't wasting much time. They did dutifully follow the notes but based on the pained expression they didn't "get it." I didn't like that every video tutorial I found said "And now you just check your integral table ...." because my students wouldn't have one on their exam. I told students the emphasis was on the relationships, what did and did not affect the strength of the field. I told students not to memorize the equations. If the problem did appear on the exam it would probably be for a partial charged ring, also known as an arc, which was done slightly differently and seemed much easier. Combine the not fun math and my inexperience with it and I was not a happy teacher for a few days.

So what do unhappy teachers do? Go back to good teaching strategies. My kids (and I) were getting confused so I made a reference table with a (1) a description of the situation with variables, (2) a picture that matched and (3) the final equation they got from the integration. Its available here as a pdf. 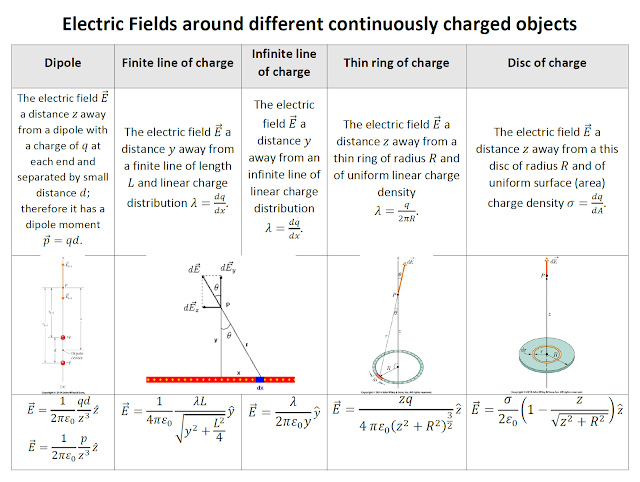 When I passed out the chart I asked them, "And what are we not doing with these equations?" and students answered "Memorize them!" So they tucked them away and may never have looked at them again.

A few days later as I was reviewing Gaussian surfaces I watched Dan Fullerton's APlusPhysics video about them. He pointed out that using Gaussian surfaces around an infinite line of charge you derive the same equation as in my chart above. My mind was blown. [cue explosion noises] When I lead students through Gaussian surfaces we worked through the derivation for the Electric Field around an infinitely long charged rod using a Gaussian cylinder. I had them take out their charts and pointed out the equation was the same as what we had found a few days ago. Then I asked them to look at the disk of charge equation and asked what it would look like as it became an infinite plane as R goes to infinity. There were audible gasps. "Wait, this is so much easier than that integration." Physics works kids. Gaussian surfaces for the win.
Posted by Bree Barnett Dreyfuss at 8:42 AM