It's my first year teaching AP Physics C (Mechanics and Electricity & Magnetism) and I am wrapping up our last Mechanics unit on Simple Harmonic Motion and Universal Gravitation. I had my students work through a simple simple pendulum lab to investigate whether the initial position, length or mass affected the period. I also wanted them to investigate physical pendulum lab and started to research them. Most labs I found used meter sticks with holes drilled in them. While I love using my industrial drill press I did not like the idea of damaging meter sticks I just got with a grant. I found 8-10" pieces of steel bar in my cabinets with two holes in each but that number of holes limited the data my students could take. I realized that hardware stores sell lengths of steel or aluminum bar with pre-punched holes so decided to investigate that.

I was able to find  1/16" thick pre-punched steel bar that was cheap. As  I tried to gather enough pieces for eight lab groups I found several bars that were bent. Remembering the destructive force that is off task high school students I worried that these bars weren't strong enough to last. There was 1" square pre-punched steel tube that was much sturdier so I set up an experiment right there in the aisle. Luckily the nuts and bolts are in the aisle so I found the right size 4" bolt (5/16") and nuts to match. After several iterations (and much waving off of employees) I found that a washer and nut on either side of the tube let the long bolt work as a pretty good axle and held the tube in place. The tubes were more expensive but hardy and I could get two 18" pieces from each one. I also bought a thinner solid bar I would drill just a few holes in for a larger all class demo. 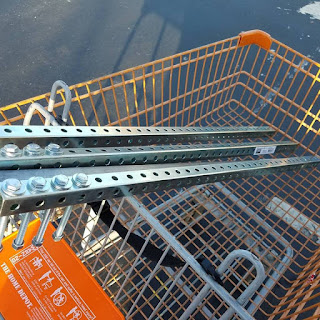 I felt pretty pleased with myself on my way home. Students would be able to adjust the distance from the center of mass of their physical pendulum to the pivot point and conduct multiple trials. The tubes were strong, I have a mounting system that wouldn't let them slide off and fall so I was feeling pretty good.

Then I realized why everyone used bars and meter sticks: they had negligible thickness compared to the length. After asking some other physics teachers it was decided that the effect was probably small:


"For a "flat" piece, thickness along the dimension in the same direction as the axis of rotation won't matter. The "other thickness" will, the moment of inertia about the center of mass should be 1/12M(l^2 +w^2), where w is the dimension perpendicular to the length and axis of rotation. That's going to be dominated by the length term in this case. If you rotate about the end, then you need to add in a (Ml^2)/4 term from the parallel-axis theorem. Since these are rectangular cross sections rather than "flat," the analysis should be more complicated, but hey, we're ignoring all of the holes in the metal, so I'm not sure how far down the rabbit hole we want to go in the first place.


Whew! Crisis averted! I sawed the 3' pieces in half (use a fine-toothed blade on a saws-all and a friend), filed the edges and put a bolt on each one. It felt like an easy lab set-up, I could hand one to each group and confidently ask them to vary the distance and find the rotational inertia of the physical pendulum using the slope of a graph.


Fast forward a week and some students let me know that they would be absent for this lab so I needed to make an alternate. I decided to collect stock data, that I would tweak a bit before giving it to them to analyze. When I started plotting the periods I measured for different distances from the center of mass of the pendulum I started to panic. I wasn't getting a line they could take the slope of! Then I called myself an idiot.

I thought my students might make the same initial mistake and decided to go with it. For the alternate version students were given hypothetical period and distance measurements for a bar physical pendulum. They were asked to graph it and describe why it wasn't the linear graph they were expecting. Then they would use one position to calculate the rotational inertia of the bar and compare that to the theoretical one using the equation.


I liked the way they would go into the experiment expecting one thing, realize their mistake and still do a few calculations. So I applied it to my whole class activity as well. Timing meant that students wouldn't be able to collect a lot of data and I thought combining group data would help add to their initial confusion. (Because sometimes I'm mean challenging like that.) I explained to students that they had a physical pendulum with holes that they could mount it from and we discussed why they couldn't use the hole (almost) at the center of mass of the tube. Each group was to collect 3-4 data points of their choice and then submit their data to me. We put all data points into a spreadsheet I had made ahead of time. It was nice having multiple groups time the same pivot position to help flush out the shape. Students were concerned immediately about patterns in their data and as the graph filled in more data points in real time there was a furrowed brow on all.


Then, there was the spark, a little "Oh! Wait it shouldn't be straight!" would erupt from some student and they would start to realize their mistake. I showed them this graph I found that matched their own data and they felt relieved. They hadn't broken physics. The rotational inertia changed every time they moved the pivot. 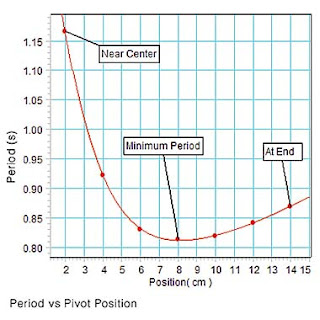 I asked students if there was a way to get the rotational inertia of the pendulum as if it was pivoting at the center of mass and after some discussion they realized that they could subtract the Parallel Axis Theorem value from each of their values. They ended up getting fairly close answers despite different groups taking the data and choosing different pivot points. Win!

With the unintended complexity of the tube vs the bar I'm quite pleased how it turned out. Students were able to confirm facts they knew and learn some new ones while getting hands on. And now they know some fundamentals about physical pendulums way better than reading about it.

Posted by Bree Barnett Dreyfuss at 11:40 AM