A Trap for Theorists

One of the highlights of the workshop program I conduct at Lawrence Livermore National Laboratory is a tour of the Electron Beam Ion Trap or EBIT. In about an hour Dr. Greg Brown explains how this incredible instrument works and what it is used for. I have toured it many times and learn new things on each tour. Before I started working at LLNL, I had no idea what an EBIT was. Now I know it is essential for many important areas of physics and astrophysics. The physics behind how the EBIT works covers many topics encountered in an introductory physics class. The areas of physics and astrophysics it is used for are highly interesting to introductory physics students. Because of this I decided to write a post about EBIT.

Astrophysics was enabled by the invention of the spectrometer. However, it didn't get started until the connection was made between the odd lines observed in solar and stellar spectra and laboratory measurements of the spectra of elements. Many scientists and engineers contributed to this effort but Gustav Kirchoff and Robert Bunsen get the lion's share of credit for this accomplishment. Together they developed techniques to purify samples and observe and record their characteristic spectra in the uncontaminated flames of, you guessed it, a Bunsen burner. This work allowed them to discover several new elements. More importantly, they realized that their work could be used to decipher the information coming from the universe through a spectroscope connected to a telescope. By comparing the absorption and emission lines of astrophysical objects to the lines measured in the lab, astrophysicists could determine the composition, temperature, magnetic field strength, motion, and much more about astrophysical objects. This led to an explosion of discovery that resulted in humans learning about nucleosynthesis and the Big Bang.
The modern day Kirchoffs and Bunsens are working at EBIT. They use a high energy beam of electrons to create ions and hold them still. They use advanced spectrometers to measure the spectral lines of these ions. You might wonder why this still needs to be done. Haven't we already measured all the spectra of the elements? The answer is no because the spectra are different for different ions and isotopes of the same element. When you consider all the naturally occurring elements and all of their isotopes and possible ionization states, you realize that this is a herculean task. Another reason this wasn't done a long time ago is that it is extremely difficult to create some of these ions. Imagine the energy required to remove the 92nd electron from a uranium atom. That is something they have done at EBIT. These high ionization states are found in high energy environments like the accretion disks of black holes, supernova, fusion experiments, and x-ray lasers. Without EBIT and other similar research facilities, astrophysicists and fusion scientists would not be able to decipher the observations they make with their spectrometers. 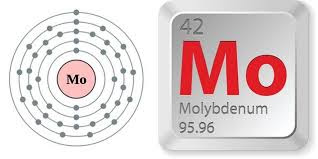 We arrived a little early at EBIT for this summer's tour. Luckily, we were met by a high school physics teacher from Hawaii, Tessie Lumabao. She had completed Level 1 and 2 of the Fusion/Astrophysics Teacher Research Academy in 2016. Tessie had first seen EBIT on the TRA tour I took the teachers on last summer. Now she was working there as a summer intern. One of the primary benefits of the TRA program is the opportunity for a paid research internship at LLNL. Tessie introduced herself to this year's TRA participants and excitedly described what she was working on. I asked her to elaborate when she mentioned they were observing the spectrum of "neon-like molybdenum". She explained that it was a molybdenum atom that had 32 electrons removed by EBIT's electron beam. That left it with only 10 electrons, just like a neutral neon atom. At this point Dr. Greg Brown joined our group and started our tour. Tessie's brief talk proved helpful as Dr. Brown scattered things like "helium-like uranium" and "beryllium-like iron" in his remarks throughout the tour. We still saw a lot of Tessie as she dashed back and forth between computer monitors connected to EBIT and the spectrometers as they collected data.

The experiment that was being conducted with Tessie's help has important implications for one of the foundations of modern physics, quantum electrodynamics or QED. This theory explains how light interacts with electrons. In other words, it explains everything you have ever seen or ever will see. QED has been tested extensively and has held up very well. It is considered to be the most accurately tested theory in physics. Theorists can use it to predict what the spectral lines of a given ion will be. These are extremely complex calculations and need to be tested with something like EBIT. In many tests their predictions hold up. In some there is a troubling discrepancy. The question is, who is right, the theorists or the experimentalists?  Observations of the spectra of astrophysical objects suggest it is the experimentalists using EBIT that are correct and the theorists and possibly QED that have a problem. It struck me that we were visiting a research facility that could change a fundamental theory in physics and one of our TRA high school physics teachers was participating in this endeavor.

I wanted to learn more about this area of research and did some digging after the workshop was over. The LLNL EBIT website is very helpful but hasn't been updated recently. Searching online I found a remarkable paper by Elmar Trabert in the journal Atoms called "Critical Assessment of Theoretical Calculations of Atomic Structure and Transition Probabilities: An Experimenter's View" (note: clicking on preceding link will download the pdf file of this paper). This 70 page paper was outside the realm of my usual summer reading but the introduction drew me in and I spent a lot of time reading the parts that I found interesting (and understandable!). I will share a few items here. The page numbers I refer to are the ones in the document that start on page 15. Here is what caught my attention in the introduction on page 15:

This didn't sound like a typical research paper. It had a sense of history and humor. He continues in the introduction on page 16 to say this:

"My aim in this article is a discussion of what I as an experimenter expect from theory and atomic structure computations, how I try to assess the quality of the work, and what experiment can or can’t do towards a critical validation process of such calculations. After all, experiments and experimenters come in many flavors, too. We all make mistakes, and maybe we can learn from some of them that we have recognized by now. In this context, I dare to digress into anecdotal evidence of various problems in the interplay of atomic structure theory and experiment, into human and technical sources of error and uncertainty, before turning to a more systematic discussion of data on specific isoelectronic sequences. However, I will not present an ultimate recipe for assessing calculated data. Both, experiment and theory, are intertwined in the scientific process, and progress may involve a new perspective, if not always a paradigm shift."

I found a mention of the QED vs experiment issue on page 52:

"Since neither experimenters nor theoreticians found fault with their own ways and results, the systematic discrepancy between experimental and computed line ratios was blamed on a variety of collisional-radiative processes in distant light sources that one could diagnose by the size of the discrepancy. However, Greg Brown’s extensive and tedious systematic studies at the LLNL EBIT [183,184] agreed with the stars, but could not suffer from the same collisional effects."

I chuckled at the adjective "tedious" but I am sure the importance of the measurements masked any sense of drudgery that may have been present during this work at EBIT. Following this mention of Dr. Brown's work, Trabert begins another digression that is uncharacteristic of the typical academic journal article. I found it fascinating. It starts on page 53 and I will leave it to you to download this paper and read this short passage on your own. If you are like me, you will get drawn in and spend more time scrolling through the rest of the paper for more of Trabert's wit and wisdom. 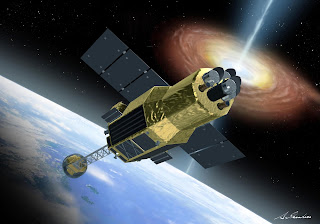 Another critical task of EBIT is to help test and design advanced spectrometers. On the tour we got to see and hear about what Dr. Brown described as the most accurate and sensitive spectrometer in the world. It is of a type I had not heard of before touring EBIT, a calorimeter spectrometer. Instead of using a grating and charge-coupled device (CCD) to measure the energy of incoming photons, it uses the temperature change photons cause when they strike the detector. EBIT helped design the x-ray calorimeter spectrometer that flew on the ill-fated Suzaku and Hitomi x-ray observatories. Suzaku lost its cryogenic coolant in just a few weeks due to a malfunction. This Japanese Hitomi spacecraft went into an uncontrolled tumble soon after it went operational and spun so fast the solar panels broke apart. Prior to that, it demonstrated the remarkable capability of the calorimeter spectrometer for x-ray astronomy. This will undoubtedly result in a follow up mission in the future. 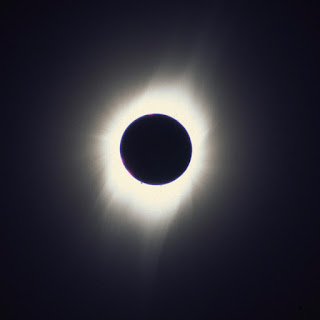 What an incredible opportunity Tessie and other teachers have to work in a facility that is helping to design and test instruments that will fly in space and discover new wonders about the universe. If you share this opinion, I urge you to sign up for the Fusion/Astrophysics Teacher Research Academy next summer at LLNL in Livermore, CA. It is tentatively set for the last two weeks in June. We typically have teachers from the Bay Area and Central Valley attend, but some teachers have traveled from as far as Thailand and Hawaii for this opportunity. I will post on The Blog of Phyz and on my Twitter account, @kilroi22, when registration opens. If you are wondering what it would look like to see an object that is so energetic it has atoms like iron missing most of their electrons you are in luck. Make your way to the eclipse path on August 21st. The solar corona is like a giant EBIT!