Make your own Transit Light Curves

I highly recommend the educational activities from SETI; especially their Kepler Mission materials found here. There are NGSS aligned activities arranged by age level. I'm looking into the Transit Tracks activities to link Kepler's equations with the Kepler mission, light and our Universal Gravitation unit.

Within that document SETI describes a demo of the Kepler mission by passing a bead on a string in front of a light bulb in a dark room. There is a note off to the side that says:

Optional: Collect Real Data
If you have a light sensor, computer with sensor interface, graphing software, and a computer display projector, place the light sensor in the plane of the planet/ bead orbit and aim sensor directly at the light. Collect brightness data and project the computer plot in real time. Let the students comment on what they are observing. Instead of swinging beads, you may use a mechanism, known as an orrery, to model the planets orbiting their star. Instructions for building an orrery from LEGO™ parts may be found on the NASA Kepler Mission website at http://kepler.nasa.gov/education/ModelsandSimulations/LegoOrrery/

I don't have Vernier light sensors but I do have the Physics Toolbox Suite on my phone which uses the light sensor already on your phone. The app is free and has many different tools all using the internal properties of your phone. I find myself using it frequently and if I ever get tablets for my classroom I'll be using this much more frequently. 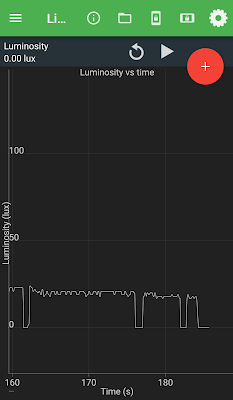 I played around with the idea over the weekend using a dim kid's light and passes my hand in front of it to model a transit. At first I tried a ceiling mounted light but I found that since its a CFL bulb there were small variations in the light that might confuse students. In class I would be using incandescent light bulbs anyway. The kids' dim flashlight had a fairly consistent output and the dips were caused by my hand in front of it in a completely dark room.

I would like to model something smaller than the light source like the bead on a string that SETI suggested. It will also be a good lesson about the difficulties of the mission as students won't see too much of a reduction in light unless the shadow of the bead passes right over the sensor on the phone. I don't have orreries but can challenge students to keep constant period orbits. Perhaps by next year I can develop something super simple like this DIY Orrey.

The nice folks in charge of the @PhysicsToolbox twitter account pointed out this The Physics Teacher article on the subject sing their light sensor for something similar.

After students learn how to read Transit Light Curves from the SETI activity I hope to have them make their own and model the same graph interpreting skills. It will only take one kid with a phone in each group to make this work and I think I'll have that covered.


Posted by Bree Barnett Dreyfuss at 8:18 AM