Many people have some version of this Inertia Ball (available from Sargent Welch, and more) and may use it for an example of inertia similar to how I have in the past. There are several videos online including this one that demonstrate the classic demo (although I don't mention tensile strength yet):
This year I asked students in groups to predict what would happen before I did it. Students were to take a few minutes of discussion; some students came up to inspect the string and gently lift the ball to see heavy it was. I asked each group to share out what they thought would happen when I pulled the string slowly; the majority of the groups correctly guessed that the top string would break. After I did the demo I asked students to discuss again what would happen if the bottom string was pulled quickly. This time groups were split, some saying that the top string would break again and some that the bottom string would break. At this point I introduced students to the word "Inertia," they had not been introduced to it before although several already knew it and start singing the "Bill Nye: The Science Guy" introduction song.

Many of these inertia balls also have a third loop on the side of the ball. I ask students what would happen when I pulled the string from this loop directly to the side. "Are you doing it quickly or slowly?" they ask and I tell them they can think of it either way but when they share out they will have include their choice in their description. Again groups are split, some think that if I pull slowly the top string will break again, others think that if I pull it quickly the side string will break. I pulled the side string slowly at first and students saw the ball shift to the side but the top string held. I briefly said that this looks like a force in the horizontal direction did not affect the vertical direction. I reminded them that we saw a similar directional independence in our projectile unit. I let the ball hang freely again then pull the bottom string quickly and it breaks. 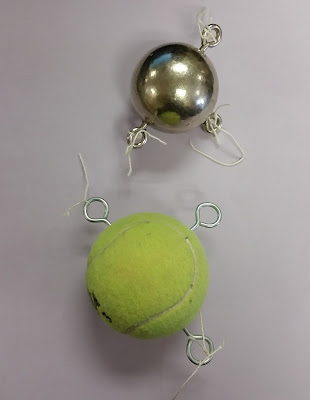 During my first period of the day while students were discussing I decided to add to this demo and make a tennis ball with the similar three eye hooks. I hung the ball and asked the students what they thought would happen if I pulled on the bottom string. Again I let them choose if they would like to think of it being pulled slowly or quickly. This time the top string breaks regardless of the bottom string being pulled quickly or slowly. Without prompting students start discussing why it happens, "Its not heavy enough!" or "See, I told you, it didn't have enough inertia."

While I gave these instructions on my whiteboard I made a powerpoint that has a visual for students as well as the questions.

For high school teachers, this connects well with the NGSS Science & Engineering Practices. Below are the excerpts I thought were most aligned to this activity:

O that arise from careful observation of phenomena, or unexpected results, to clarify and/or seek additional information.
O to clarify and refine a model, an explanation, or an engineering problem.

Modeling:
O Develop, revise, and/or use a model based on evidence to illustrate and/or predict the relationships between systems or between components of a system.
Posted by Bree Barnett Dreyfuss at 9:57 PM