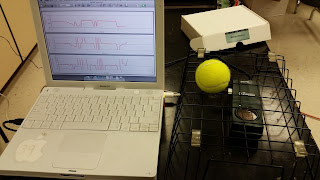 I decided this year that if I was going to continue to take the time to teach students how to interpret kinematics graphs of motion (displacement-time, velocity-time and acceleration-time graphs) I was going to bring them up more often during the year. As we transition in my class from basic kinematics equations to projectiles I was looking for a lab that did just that. This is where it pays to keep more resources than you currently use in your curriculum. I found a pdf I had downloaded from Vernier using motion detectors and a ball. The lab looked simple enough and I tried to reproduce the results myself.

The original instructions had called for a wire basket to be placed over the motion detector to protect it from the ball's return. I tried this with a tennis ball and found it very difficult to get the tennis ball to go up and down directly above the sensor. After lots of attempts (seriously like 50)  I was able to get three sets of data to work with: 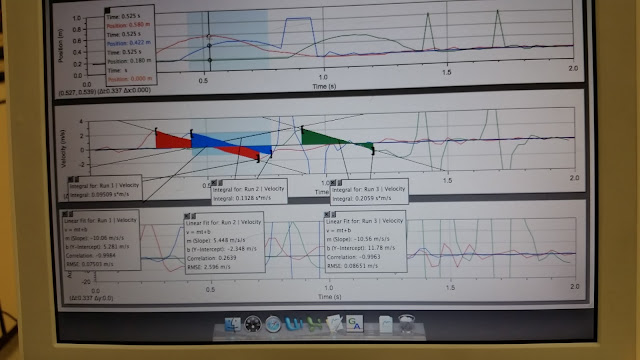 After tweeting to @VernierST I was able to get a few suggestions that made it basically fool proof:
1. Instead of a small tennis ball use a larger basketball (more reflective surface for the sonar).
2. Instead of a wire basket, which I didn't have enough of anyway, try putting two books on either side of the sensor.

Since my books are shorter I had students put two books on either side of the sensor as it was facing up on the table-top (above a picture from their lab). Students got great results and were able to focus more on analyzing the graphs using the tools in LoggerPro. Below is a sample set with the points I asked students to mark in their lab. Overall the lab was actually pretty quick and reliable. I think I could even move up the timing of the lab in my unit as an introduction to gravity rather than a review. Here is the lab I used. 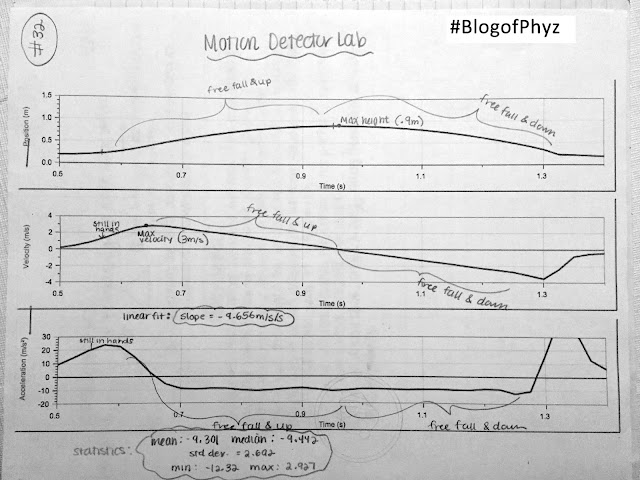 You can also use playground balls instead, which are not heavy or hard enough to damage the sensor. They generally only get 9.2 m/s^2 at best, but it then makes for a good error discussion. (We contrast it with a picket fence measurement done as a class demo) And the graph shapes still make the major points that you want to hit