Donate your toy to science 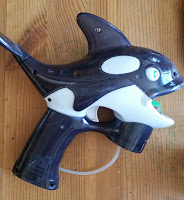 My kids got these killer whale bubble blowing light up toys on a trip to Sea World (thanks to grandma). The toy quality was about what you'd expect and soon they stopped working. Destined for the bottom of the outside toy box my daughter brought one to me and asked, "Mommy can you fix this?"

I said sure, then realized it was DOA. So I decided to do an autopsy. I had taken apart a bubble blower hoping to fix it and when I tested the motor directly connected to a battery I found that it was broken. I expected the same for this whale bubble blower so I started pulling it apart. Inside I found a motor, capacitor and a small circuit board that controlled the LEDs that had been in the mouth, tail and along the side. 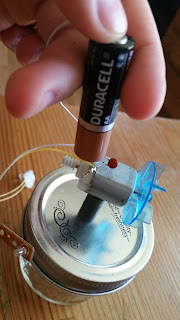 I was surprised to find that the motor still functioned. I tested it by using a AA battery connecting one white wire from the motor and other to the solder point on the other motor terminal. The motor spun fine and sometimes the LEDs lit up as well.

For awhile I thought that the LEDs were only lighting up when I touched the end of the capacitor across the motor terminals. Connecting the battery to the end of the capacitor, but not the solder point, the LEDs would blink. Each time I tried to recreate this though, the results were different. After some fiddling I found that just as the battery was connected or removed the LEDs would flash but not when the battery was connected for a time. Once I determined that I had a realization: I'm an idiot.

Well, not exactly. I remembered that what had attracted me to this circuit was the capacitor in it. [In my defense I was simultaneously fending off little fingers that thought the wheel on the motor looked like fun.] With the capacitor in the circuit the LEDs were only lighting up as the capacitor was being discharged.


After this project was ferried back and forth in my grading bag (I kept promising myself that this night or that prep time I would fiddle with it) a few of the wires have fallen out. I'll have to re-solder it to get the circuit to work again. If I want it to - so what do I want to get out of it?


On one hand its a practical use of a capacitor to show my students. I can either use this circuit or model more with the same premise for students to experiment with.
Or I can scrap it for parts. I have a pile of miscellaneous electronics parts that occasionally come in handy so I can toss it in there. And I now have a motor with a fit wheel and worm gear on one end. 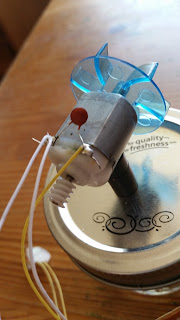 A great outcome was making this little motor holder. To fend off the eager "helpers" that were watching my whale autopsy I put some magnets on a mason jar to hold the motor. It worked great as an extra hand and helped hold it up high enough I didn't worry about the fan hitting anything.

I'm thinking all future dead toys will get the same treatment. Mommy needs some new parts!
Posted by Bree Barnett Dreyfuss at 11:10 AM