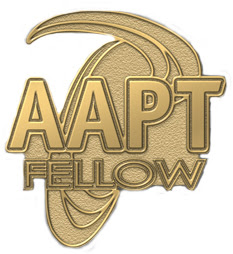 The American Association of Physics Teachers formally unveiled its Fellows program at the Awards session of its Summer 2014 meeting at The University of Minnesota in Minneapolis.

Generally speaking, previous AAPT award winners were inducted as the Inaugural Cohort. I was a recipient of their Distinguished Service Citation in 2008. And that's how I came to be included on a list of physics-teaching heavyweights. It's true, I have an ego the size of Montana, but I'm also grounded enough to know I'm dwarfed by the giants on this list.

AAPT's Fellows Announcement Page
A List of the Inaugural Cohort
Posted by Dean Baird at 1:09 PM