A MISTAKE IN THE MECHANICAL UNIVERSE?

I think I just saw a mistake in a video I've been showing since about 1990. If I haven't mentioned it before, I'm sometimes a bit slow on the uptake.
I'm not talking about the errant reference to 1655 as the year Newton worked out Universal Gravitation. Or the estimate of a firefighters weight as "90 kilograms," or the pronunciation of Georg Simon Ohm's first name as "George."
The Mechanical Universe episode to which I refer is "Waves." The error is in the episode's depiction of water waves.

Water waves are "combination waves." That is, they are neither purely longitudinal nor purely transverse. Particles on the surface of water do not move forward and backward, nor side to side relative to the direction of wave propagation.

Instead, these particles travel in ellipses or circles. My student teacher, Marissa Swanson, recently showed me a nice set of animations developed by David Russell at Pennsylvania State University. The page has animations for longitudinal waves, transverse waves, water waves, and Rayleigh waves.

Rayleigh waves (a form of seismic waves) are one result of an earthquake. They are combination waves, too. So a particle on the surface of the Earth travels in an ellipse or circle when a Rayleigh wave passes through it.

But here's the thing: water waves and Rayleigh waves are akin to chiral opposites.

When the crest of a water wave passes through, a particle of water moves forward (in the direction of propagation). When that particle "rides" the trough, it moves backward.

When the crest of a Rayleigh wave passes through, a particle of earth moves backward (opposite the direction of propagation). When that particle "rides" the trough, it moves forward.

2. Check The Mechanical Universe "Waves" at timecode 19:00 in the discussion and animation of water waves. If my video capturing skills were greater than they are, I would have embedded this as an isolated video clip. Here's a link to a subtitled clip—proceed directly to 4:34. 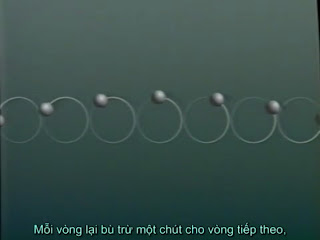 The water waves are depicted as Rayleigh waves!

The narration announces the overall effect as "giving the familiar undulation of the watery surface." But it doesn't. The surface shows convex crests with pointed troughs. The Penn State animation shows the more correct concave troughs and pointed crests.

Me? I never make mistakes in anything that I ever due! So if this is old news, don't tell me. I'm giddy with excitement only a true nerd could appreciate.

UPDATE 2: My friend, Dan Burns, reminded me that the most egregious error in The Mechanical Universe universe was the narration that accompanies the "Special Relativity" episode. Viewers will recall the sequence involving "Albert" (Einstein) and "Henry" (Poincaré, americanized). In the deepest depths of an animated illustration of the relativity of simultaneity, Henry is referred to as Galileo. Students have been known to jump through a window behind that blooper. That's not the kind of error that slips past anyone for 20+ years.

UPDATE 3: Upon further examination, it appears that the "Henry" of the Mechanical Universe simultaneity animations is actually Hendrik Lorentz.
Posted by Dean Baird at 2:49 PM

As a science teacher, I thought you would appreciate this resource:
http://www.numbersleuth.org/universe/