Physics teachers know everything. Or at least it seems that way when you're an interested student in a physics class. I recall feeling that way when I was such a student. I was also in the midst of deciding colleges and careers at the time. The only career path I consciously eliminated from the realm of possibilities was that of physics teacher. Funny how that turned out.

Part of being a physics teacher is revealing the workings of reality to students who have not yet been so enlightened. Mysteries are solved and misconceptions are dispelled. It's easy for a perception omniscience to accumulate around the wizard instructor. Some teachers revel in this perception and everything they can to perpetuate it.

I do not. I have some understanding as to the magnitude of my ignorance and rarely cease to be amazed by the immensity of my density. I've been lucky enough to have some truly brilliant students pass through my classroom on their way to greatness. I often tell friends and colleagues that I'm always delighted to get such students. "I get students that are ten times smarter than I'm ever gonna be," I tell them. That puts people a little off-balance. The teacher is supposed to be the smartest person in the room!

Of course, I'm a couple of pages ahead of them in the physics book, so I still manage to keep my bright students duly entertained and I've got things to teach them. But I can see that they've got capacities beyond my own. And that does not bother me in the least. I'm happy for them!

I was reminded of this when listening to National Public Radio the other day. It was a Nina Totenberg piece on the Supreme Court's ill-decided school desegregation case. Mara solicited analysis from UC Berkeley law professor Goodwin Liu. Goodwin Liu was a student in my AP Physics class my very first year of teaching. He went on to Stanford, Oxford, and Yale before returning to California as a professor at Boalt Hall. Oh, and he clerked for Supreme Court Associate Justice Ruth Bader Ginsberg along the way. Totenberg sought Liu's analysis because he's something of an expert in the area.

I sent him a note to tell him how proud I was. And he wrote back! Mind you, he's likely got somewhere between 1E+3 to 1E+6 better and more important things to than return an unsolicited note from a blast-from-the-past teacher. A teacher who was, erm, far from perfecting his craft that first year. What can I say? He's a classy guy in addition to being a learned scholar.

I also let him know that he will be giving me a personal tour of the Supreme Court once he's appointed. I'm nothing if not courteous in providing advance notice on such things.

Can you spot him in this archival photo? 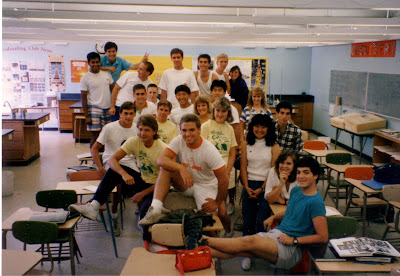 I became increasingly emotional as I was reading through this post. My search on "Goodwin Liu" led to your blog. Prof. Liu, as young as he is, will do great things for this country. You are a wonderful teacher from my perspective. Best wishes!

(From the news - March 13, 2010) Thirteen months into his presidency, Barack Obama finally gave liberal supporters the kind of judicial nominee they had sought and conservatives feared.
Goodwin Liu, 39, is an unabashed liberal legal scholar who, if confirmed, could become a force on the federal appeals court for decades. There's talk that in time, the Rhodes Scholar, former high court clerk and current assistant dean and law professor at the University of California, Berkeley, could be the first person of Asian descent chosen for the Supreme Court.