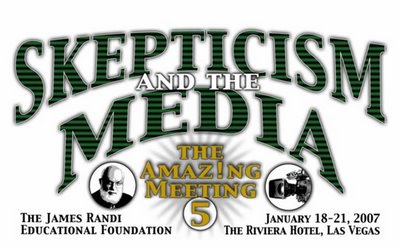 It's THE conference of the year, every year. The James Randi Education Foundation (JREF) assembles a truly amazing set of guest speakers and brings back some of the best from TAMs past. Thoughts are provoked, laughs are released, and for a few days in January, all seems right with the world.

Registration continues for TAM5: Skepticism and the Media which will be held Thursday, January 18 through Sunday, January 21 at the Riviera Hotel in Las Vegas. This year's luminaries include...

Not to mention the audience, which should break the 1000-person mark this year. Smart, witty people you want to know.

Conference attendance has gone from 100 to 300 to 500 to 800. It grows because most people who go once become addicted. So past attendees return and bring friends/relatives next time. I dare you to attend just one!
Posted by Dean Baird at 10:44 AM