My regular Physics class starts the year with basic graphing skills and learning how to interpret graphs of motion. Tuesday we used Vernier Picket Fences and Photogates to determine the acceleration due to gravity. 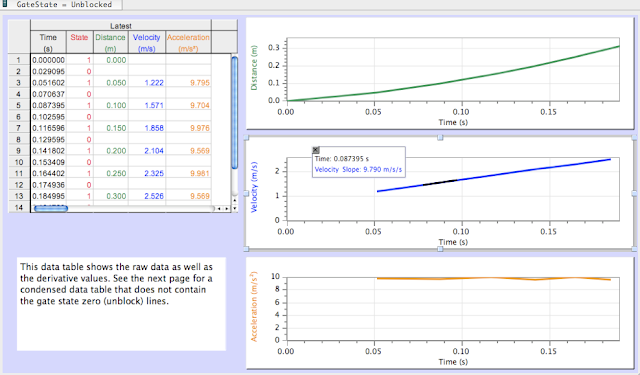 By this time in the unit my students understand the relationship between the three graphs for something moving with a constant acceleration. They've even graphed something similar by hand; and they saw the same shape with their lab (above). So I found myself wondering, "Why am I making them do it again?" I gave a small quiz last week and noticed that students were having trouble with tangent lines to approximate the slope of a curved line.

After reflecting on this I changed the activity. I took the acceleration due to gravity at the different locations in our Solar System and worked the data backwards to create the displacement-time graphs for each one. (data here) I printed out enough copies for students to work in pairs and laminated them; I also laminated graph paper. Students were given the displacement-time graphs Wednesday and asked to practice their tangent skills to determine the instantaneous slope at several points. They used these values to create a velocity-time graph on the graph paper using dry erase pens. Note: Overhead projector pens work as well and since they are finer tip would probably have worked better. 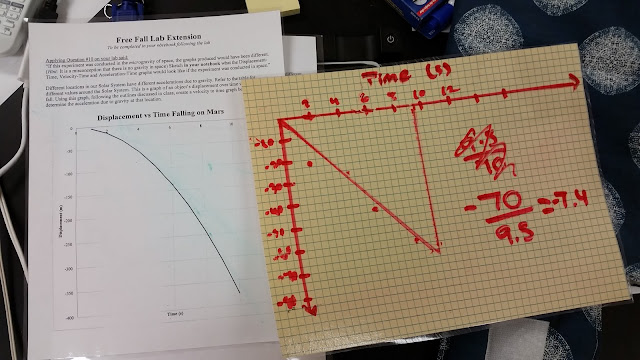 Students dove into it, determined to get very close values to the actual acceleration due to gravity. I soon found however that many were trying to use power regressions to solve it; I have quite a few students in AP Calculus. Others found the slope at the beginning and end of the curve, connected those two dots and called it a day. Students were calculating accelerations due to gravity for Mars or Mercury at 400+ m/s2! After some help around the room most students were better about using the tangent method, finding five to six points, paying closer attention to scale, and felt pretty good about their calculations. Yet as students came up to check their answers with me they were consistently twice as high as the actual value. Enough students had almost twice the values that I went back to check my data.

As my students would say, *face palm*; I totally blame the toddler-induced lack of sleep. The students were doing it right (good) and they didn't really know the acceleration due to gravity on other planets anyway so they didn't catch my mistake (even better). In the end I decided it would be a good way of introducing the equation next week and discussing why it is so important to include that (1/2).

I've fixed the data (available again here) and the printing pages (pdf or google doc) and plan to do this again next year. I have very sparse grid lines; depending on your students' math level you might want to give them more grid lines. In the end students were able to practice a skill, broaden their understanding of a concept and I didn't have to grade anything. Aside from my miscalculation, it was a win all around.
Posted by Bree Barnett Dreyfuss at 10:29 PM