Mounted (but not stuffed) Toaster

I have a ripped apart, non-working toaster and I want to use it to show my students a by product of electricity is heat. Since I took out the controlling circuit board and detached the plug I needed to hook it up to a voltage generator. When I first played with the toaster I was able to get a bit of heat but it was cumbersome to hold the wires and hold the toaster up for students to see.

I mounted the toaster to a piece of wood with two screws and added an angled piece of wood underneath so that it would be easier for the class to see. The toaster is actually on its side; the white plastic piece is the carriage that moves the bread up. I opened one side so that the heating elements were easy access. I soldered two alligator clips to the wires so that it would be easy to connect to the voltage generator. 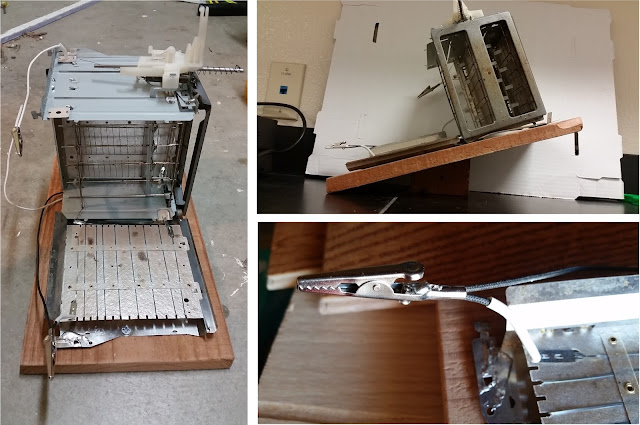 Since the toaster isn't connected to a standard 120-V outlet the filaments don't get red hot. You can feel the heat near the filaments but the whole point of this demo was to show an entire class how it worked. Taking the time to (and the risk of) students putting their hands near the toaster wasn't going to work. 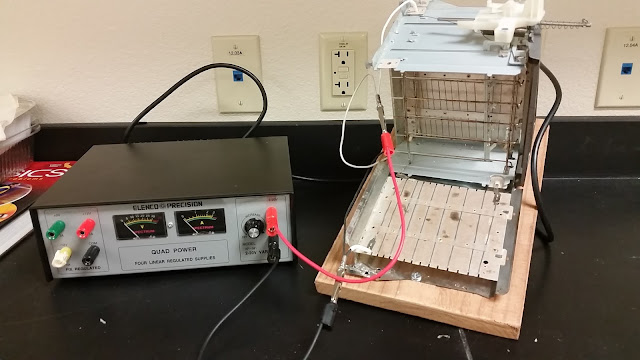 I hooked up the toaster to a voltage generator and used thermo paper to "show" the heat. Of course a heat vision camera would do the job nicely as well. I have three different temperature ranged pieces of thermo paper from Educational Innovations: 20-25 °C, 25-30 °C and 30-35 °C. The first was too low to be useful but the other two when held near the filaments showed the heat coming off the coils. I held the paper with a binder clip, not because it was hot near the toaster but because I was hot. *badum ching* Seriously, my own body heat would register on the thermo paper (as seen in the upper left of the last part of the clip) and thus would affect the visual.

Some of you may be worried about mounting an exposed toaster that gives off heat to a piece of wood. Don't worry, I checked and its okay. I left the toaster on for a few minutes then after I turned it off I used the 25-30 °C thermo paper to visualize the heat still coming off the filaments and then below them on the metal that actually touches the wood. No heat registered on the metal against the wood.

Posted by Bree Barnett Dreyfuss at 9:38 AM