I have mentored and coached for the New Teacher Program through the Exploratorium's Teacher Institute for several years now. Many summers I get to work with teachers in their first few years of teaching as they participate in an intensive three week institute. I went through it myself ten years ago and it is a lot of great information and wonderful pedagogy. I learned more in those three weeks than in my entire credential program about teaching science.

It is exciting when a new teacher discovers or comes up with something that is so cool it has be shared. Summer 2016 Ajayi Lawrence was focused on light and took a journey through diffraction, color addition, filters, etc. There were several times that we took red, green and blue LEDs to darker exhibits to experiment. Lots of "Oh that was cool, do that again!" and talking out what we saw, especially when it was contrary to our predictions. (It's good to be wrong sometimes!)

Later we took the same pair of glasses to the Colored Shadows exhibit (which can be recreated in your classroom using this Science Snack) and snapped this great picture. 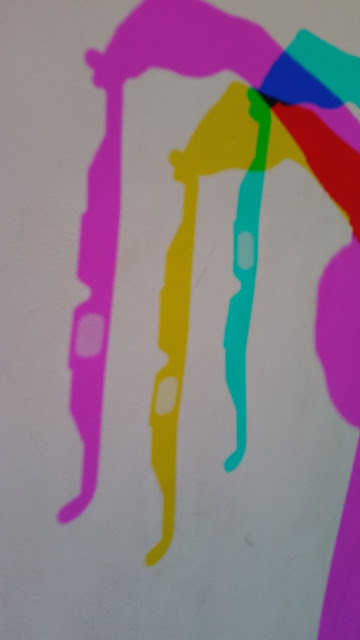 Ajayi and I both said that showing this picture to students and asking them to determine the colors of each filter would be a great way of  assessing what they have learned about color addition and subtraction. This year in our color unit I showed this picture to my students and didn't tell them that they were 3D glasses. After some discussion they realized that the two lens of the glasses must be different, which reminds them of "old" 3D glasses. Most of your students will have never used red-blue 3D glasses before, by the way. After they discover that they have to think about what light passing through one of those filters would look like versus lighting being blocked by the filter.

This was done as a quick end of class activity to wrap up some other concepts. I would have preferred it to be discussed in small groups with whiteboards so that students could make their own drawings. I've written up a worksheet that is a little more guided, adding a portion on the colored shadows of hands I already use, that is available untested as a pdf. If you want to check your answer here is a visual key.
Posted by Bree Barnett Dreyfuss at 2:29 PM