The last on my School's Out, Tools Out build list was a two way mirror box. Once while visiting Tap Plastics I saw a small black box on a shelf. There was a mirrored front and a sign that said "Flip the switch!" When I did a light bulb appeared inside the black box as it turned on. Turning it off made the light bulb "disappear." I bought a square foot of two-way mirror acrylic on the spot for about $20 and added it to my mental build list. 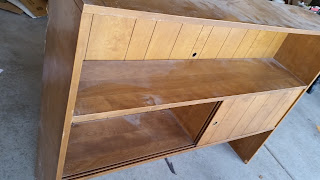 This summer I finally built it. I used an old bureau bookcase we cleaned out of our garage because it already had routed tracks for a sliding door. I planned on building it myself and just needed to borrow my father-in-law's chop saw to make the angled cuts. Well, he's retired and likes projects so he ended up building it for me. It was a hard gift to refuse a few weeks before school started. 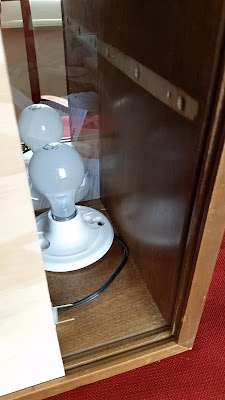 In retrospect I would have liked to spray paint the inside of the box black before adding the mirror. I can still paint it black by hand. The box has to have a sliding panel on the back in order to access the light bulb for replacement. I built a simple light base using a plastic lampholder, in-line cord switch and a plug at the end with some extra wire I had. The wire could be pulled through a hole in this back panel but light leaks are an issue so use some kind of gasket on it. I would like to find a remote operated light for dramatic effect so I don't have to be next to the box flipping the switch.

You can see in the picture at right the actual light bulb in the front and its reflection in the back. The two-way mirror has a mirrored finish on only one side, I put this mirrored side to the inside. As far as I could tell it would work either way but this way the more delicate mirrored side is inside the box. You can see the groove that was used for the back panel.

In order for the box to work well the inside has to be as dark as possible and the room it is sitting in as bright as possible. If you look closely enough you can barely see the light bulb inside before it is turned on. In these pictures below I enjoyed surprising my kids. The room lighting did not change, my camera however did change its light settings making the outer room look darker because of the brightness of the bulb.

Here's a video, although again there is a big change in the camera light settings. I swear I wasn't simultaneously turning off the room lights. You can see the inside of the box is unpainted.


Students always ask about two way mirrors when we talk about light reflection and refraction. We talk about transparent vs translucent vs opaque materials and I ask students which one describes a mirror. Most students correctly identify it as an opaque material, something that reflects or blocks all of the light letting (almost) none of it through the mirror. "But what about a two way mirror?!" Then a series of comments like "This one time in this one movie..." follow. Now I can pull this out from behind my demo table with a "ta da" flare and demo it on the spot.

Here is a video that explains how they work if you are unfamiliar:

Might be fun to put a scary mask in front of the light bulb.