The 18-month wait has ended and TAM6 has convened. This year's TAM is at The Flamingo Las Vegas. Registration and reception allowed for reconnecting with "skeptical friends" Phil Plait (The Bad Astronomer), Swoopy and Derek (Skepticality), Glenn (Hindmost), Karen Stollznow, Susan, The Petersons (Desktop Icon & Carol), and Angela (Articulett). And to connect with Luciana, Mattus Maximus, Normal Dude, Lee, and a few others whose names I will soon internalize. 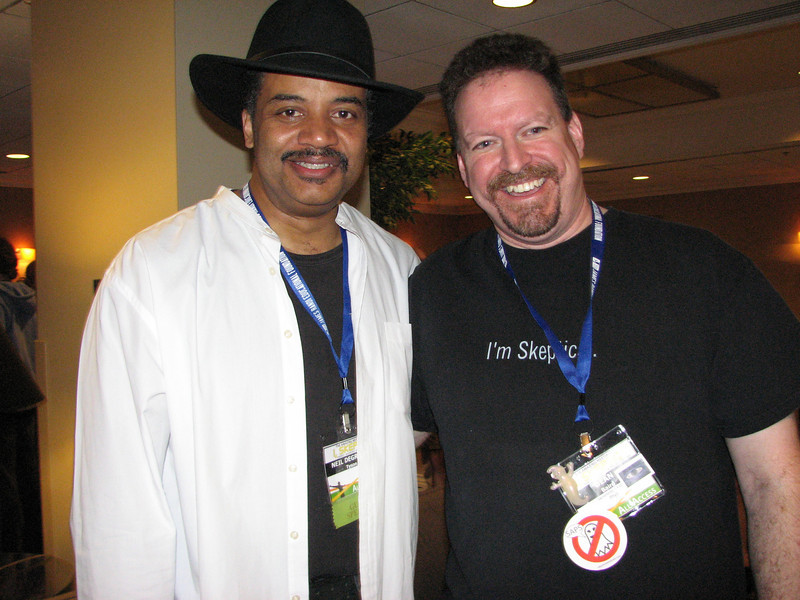 With Articulett's help, I got a groupie shot with Neil deGrasse Tyson. And yes, he is that tall. We look up to him in more ways than one.

More pics in "preview" form can be found here.
Posted by Dean Baird at 1:21 AM 3 comments:

The leader of band has died 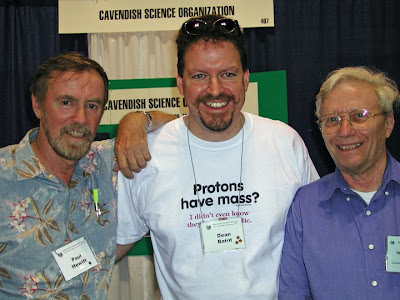 I found out today that my master teacher, Walt Scheider (on right), passed away last month. My thoughts are with his family.

Walt was an inspiration to me at a very formative time--the beginning of my career. He will always be among the brightest stars in the constellation by which I steer my ship of instruction.

It was my favorite teacher in the Michigan Physics Department, Lecturer Jean Krisch, who recommended that I work with Walt for classroom observations and student teaching. Her own daughter had been through his class. But Walt had never had a student teacher before. And when I approached him on the matter, it didn't seem he was terribly keen to take one on. All U of M physics teachers-in-training had always worked with the teacher at Ann Arbor's other public high school. Not with Scheider up at Huron. But I was tenacious and he eventually relented.

I remember being in awe of him most of the time I observed him. I was reading The Feynman Lectures in Physics at the time and thought someone should come out and document The Scheider Lessons in High School Physics for the benefit of teachers who did not share my good fortune of observing the master directly in class.

And I cannot describe how intimidated I felt when it was my turn to teach his students. Walt was very protective of his physics students. There were only so many minutes in the school year and each one of them was important to him. Time lost to a journeyman bumbler like me was to be kept to a minimum.

I felt bad about my performance knowing how much better he was. I was pretty sure his evaluation of me would include phrases like, "Ya know, there are a lot of career options available to people who know as much physics as you do." But instead he was quite generous and felt I held some measure of promise.

We kept in touch after I graduated and moved to California. The photo of Paul Hewitt, me, and Walt Scheider above was the result of a chance reunion in Rochester, New York, at the AAPT Meeting in summer, 2003. By then he was retired from teaching but well into his career as a book author. I recall Hewitt being impressed with Scheider's success in this regard,

I'm grateful for the relationship I had with Walt Scheider and will miss him. I hope that part of him lives on through me.

Here's a remembrance published in The Ann Arbor News.
Posted by Dean Baird at 3:23 PM No comments:

Did you know you can cook popcorn (and eggs) with you cell phone? No? Oh, that's because you can't.

But the myth is good enough to inspire this badly-acted YouTube virus.

Great fun. But fake. (The orange juice is a nice touch, though. The Japanese version features tea and the French one features beer. Apparently this trick requires imbibing something.)

Wired Underwire. Warning: this link gets all "factual," and leans heavily on "science." Talk about a killjoy!


What's especially disheartening is to read the YouTube comments of the apologists for these hoaxes. Sigh.
Posted by Dean Baird at 4:36 AM No comments:

Do teachers get smarter in the summer?

I ponder because our mostly Rio teacher Sac Brew trivia team, currently named "Wipe the Klingons Off Uranus. Please!", often does better during the summer. And I nailed today's NPR Sunday Puzzle Listener Challenge fairly quickly. I usually don't even try. I enjoy playing along with the on-air puzzle, but the listener challenges go right through me.

I know that when school is on, it consumes my focus to the exclusion of nearly anything else. And if you know me, that explains a lot of things (sadly). So when Alice Cooper's "School's Out" rips through campus on the last day of school, it's as if a burden has been lifted and I can finally slow down my curriculum-development activities to a civilized pace.

Anyway, here's the challenge. Submit your answer via the link above.

A calculator displays a five-digit number. The first four digits are 8735. These digits form a logical sequence. What is the fifth number in the series?

UPDATE: Car Talk's Puzzler for the week of June 9 didn't fare any better against my "First Sunday of Summer" mental agility.

And if you didn't click that Alice Cooper link, you're seriously missing out.
Posted by Dean Baird at 8:24 AM No comments: